Racing hero Kevin Schwantz enjoyed the perfect birthday celebrations yesterday, 19 June, at World GP Bike Legends. First he blasted around the world famous Jerez circuit on his 1994 XR84 500cc Suzuki – the very bike he rode as World Champion – before partying with fellow superstars and enjoying the live music party in the paddock.

The Suzuki specialist began his 500cc career in 1986, and now returns to the track alongside an amazing collection of his rivals from the heyday of grand prix motorcycle racing. Together with the likes of Freddie Spencer, Wayne Gardner and Christian Sarron, there were few better ways for Schwantz to celebrate than aboard the sensational machine that carried the #1 in 1994. Over the rest of the weekend he’ll be going elbow to elbow with his fellow legends.

“What a great 51st birthday present to get to ride my ’94 Lucky Strike Suzuki XR84!” said Schwantz. “It’s awesome to be in Jerez with all the Spanish fans, and it’s an honour to still be involved in motorcycling and especially at this event surrounded by so many legends!”

Having familiarised himself with the Jerez circuit during the day, Schwantz swapped his leathers for something a little smarter to enjoy the evening’s musical entertainment from some of the top tribute acts around. QueenMania and The ZZ Tops blasted out their hits, while the party didn’t go on too late, World GP Bike Legends celebrations undoubtedly kicked off in style.

For all the latest news and pictures from the weekend, go to www.worldgpbikelegends.com 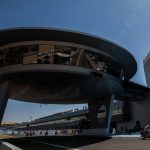 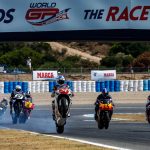