Having won the 250cc and 350cc World Championships in 1962 and 1963, and the 350cc title again in 1964 and 1965, London born Rhodesian ace Jim Redman MBE is a true World Bike GP Legend.
In 1964 Redman became the first rider to win three Grand Prix victories in a day, and he went on to score a total of 45 GP victories during his career, including four 125cc and two 500cc class victories. He stood on the GP podium no less than 98 times and was also a six-time Isle of Man TT winner, but he took an early retirement following injury during the 1966 season. More recently Redman’s achievements earned him a place in the elite group of official MotoGP™ Legends as honoured by the FIM, the world governing body.

Along with a dozen or so former Grand Prix stars, three other FIM MotoGP™ Legends will also be competing in the two World GP Bike Legends showcase races at the forthcoming Sachsenring Classic: Australia’s first World Champion Wayne Gardner who won the 500cc title in 1987, fellow rider/ambassador Freddie Spencer (USA) who took the 500cc championship in 1983 and both the 500 and 250 titles in 1985, and Phil Read MBE (GB) who notched up seven world GP titles in the 125, 250 and 500cc classes from 1968 to 1974, along with his eight TT wins.

Sharing the limelight will be a full grid of screaming 500cc two-stroke machines dating from the 1970s to the 2000s. These will include several ex-factory Cagiva V4 500s (formerly campaigned by the likes of Mamola and de Radigues), a number of Suzuki RG and RGV 500s (ex-Read and Roberts Jnr), and rare ex-factory Kawasaki KR500 (formerly ridden by Ballington and Hansford) along with an ex-Team Roberts Proton KRv3 piloted by Jeremy McWilliams.

Redman, who has confirmed these will be his final races, is looking forward to signing off in style. He said: “The Sachsenring is like a second home to me. I first raced there in 1958 when it was about 10kms long with cobblestones. I won six GPs there, and since then I’ve paraded and talked to the street party crowds during many MotoGP events. One year the MotoGP crowd did a Mexican wave for me all around the track, and I planted a tree when the new circuit opened in the late ‘90s.”

When asked about racing a 500 GP bike Redman replied: “I’m 84 now – only half way through my life! – so I’ll be going off waving to the crowd. When Wayne and Freddie and the other youngsters catch me up I’ll speed up a bit and say I was in the lead! It’s going to be fun and I’m looking forward to it.”

Gardner said: “Jim is a very impressive man and, with six World Championships to his name, he’s had a truly outstanding career. Although now in his mid 80s, he’s still agile and willing to ride a 500 GP bike, and I’m really honoured that he’ll be with us on track at the Sachesnring – a circuit where he still has a loyal following due to his many successes in the East German GPs of the 1960s. Furthermore, this will be an extra special occasion as, although Jim plans to ride in a few more parades and display events, these World GP Bike Legends races will be his final competitive outings. He’s a real gent and it’s a privilege to have him join us.”

For those unable to make it to the Sachsenring Classic, a number of ex GP stars and their superfast machines will be returning to one of the fastest tracks for a demonstration at the annual three-day Silverstone Classic (29-31 July). 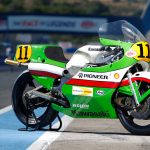 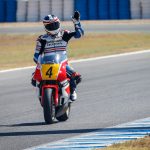