World Champions Wayne Gardner and Freddie Spencer were on hand to do the honours, as were the celebrated Yamaha YZR-500 and the new Yamaha R1 Sports bike. Both the 500cc & 1000cc bikes will take part in World GP Bike Legends events in the 2017 season.

Wayne Gardner was pleased to make the announcement that Yamaha would work with World GP Bike Legends in the 2017 season. Wayne said “Yamaha are the first of the manufacturers to join us at World GP Bike Legends, and will be providing their latest sports bikes for this season.”

Whilst the riders on the World GP Bike Legends circuit will still be seen on the original 500cc GP bikes of the 1980’s and 1990’s, the new model of Sports bikes provided by Yamaha this season will allow the riders to race faster and safer, with all the noise and excitement of the racing of the 1980’s.

The bikes provided by Yamaha will be in classic colours and decals, taking fans back to Grand Prix seasons of the past. The technology associated with Yamaha’s modern Sports bikes will allow the riders to really show their ability, as well as adding a new dimension to events. 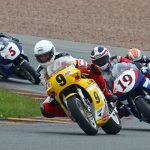 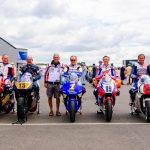