Graeme Crosby (NZ) is a former professional GP Racer who was equally capable on either a 4 stroke Superbike or 2 stroke GP bike. He holds the distinction of being the only person to have won the Daytona 200, Imola 200, Suzuka 8 hour & Isle of Man TT.

On finishing his motorcycle racing career, he returned to New Zealand to become a commercial  pilot and also competed in the touring car championship. 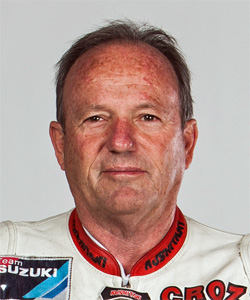